New research demonstrates the use of a pulsed laser diode in photoacoustic tomography, a technique that uses light pulses to generate sound waves in a sample, which are then detected by an ultrasound detector and from which images can be produced computationally. Due to the higher pulse rate of this laser compared with those typically used, it was possible to image a dynamic system with frame rates up to 7000 frames per second. The authors also noted the benefits in terms of lower cost compared to other pulsed laser systems, and the potential to integrate the optics into a compact clinical device.

Photoacoustic tomography (PAT) uses light pulses to generate acoustic waves in a sample that are then detected by an ultrasound device and interpreted computationally to create images of what lies beneath the surface.

Near infrared (NIR) lasers are used because of the greater penetration depth in biological tissues at those wavelengths, which is one of its advantages over purely optical imaging techniques like optical coherence tomography (OCT). Its advantage over standard ultrasound imaging is that PAT can provide far greater imaging contrast. 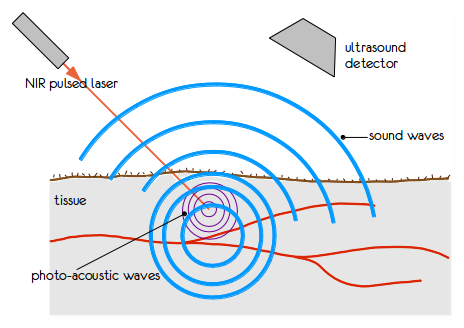 Lasers typically used in PAT have pulse frequencies limited to the 10's of Hertz range, which means they are not suitable for imaging dynamic systems. The researchers of this latest work1 used a  pulsed laser diode (PLD) operating at 7000 Hz with a clinical ultrasound imaging system. They successfully demonstrated PAT in an experiment that simulated blood flow 2 to 3 cm beneath the surface of a tissue sample. They were able to image and accurately measure flow rates between 3 and 14 cm/s, and they propose a theoretical limit of 134.4 m/s would be possible with this setup.

As well as opening up the opportunity to perform high frame rate imaging of biological systems, like the movement of cells inside a blood vessel, laser diodes are also smaller and cheaper than those typically used in PAT. This brings the possibility of a clinical PAT device closer to reality.

Articles published in the Optical Future's blog are licensed under a Creative Commons Attribution-Non-Commercial 2.5 Canada License.