Skip to main content
2016-09-30 20:33 UTC
A potential method for remotely detecting pollutants and other chemicals in the atmosphere, has been demonstrated by physicists at the Massachusetts Institute of Technology (MIT) 1.
They generated laser filaments in ambient air -- effectively short channels of plasma along the path of the laser -- in which the natural focusing effect of the high power laser light is balanced by the defocusing caused by the plasma it generates. These extended for several centimetres in the laboratory experiments. The resulting broadband, mid infrared (IR) light back-scattered from these filaments is in the ideal part of the electromagnetic spectrum for revealing the presence of biochemicals and pollutants by using spectroscopy to identify their unique signatures. 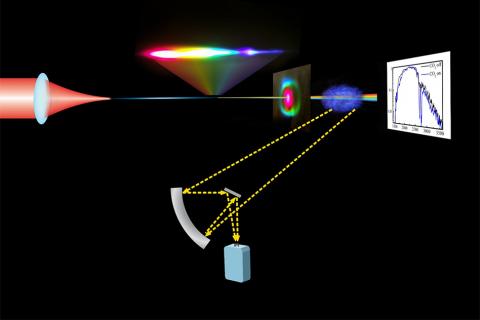 Diagram showing laser filamentation and remote spectroscopic detection of the back-scattered light 2.
The breakthrough was in producing sufficient peak laser power at mid-IR wavelengths necessary to generate the filamentation. Most of the work on filamentation has up until now been performed in the visible and near IR spectrum, but it becomes more challenging at longer wavelengths because the necessary peak powers scale with the square of the wavelength. Their laser system produced 2.1 μm wavelength, 1.7 mJ, 33 fs pulses at a 1 kHz repetition rate, providing sufficient peak powers to exceed the threshold for filamentation.
This is not the first report of mid-IR laser filamentation at atmospheric pressures3, but the MIT researchers claim they have demonstrated it at more practical pulse frequencies for use in atmospheric studies. In their laboratory demonstration they were able to detect atmospheric CO2 using absorption spectroscopy. The same method could potentially be used to detect chemicals at much longer stand-off distances, such as pollutants high in the atmosphere or hazardous, industrial biochemicals from a safe distance away.

Articles published in the Optical Future's blog are licensed under a Creative Commons Attribution-Non-Commercial 2.5 Canada License.